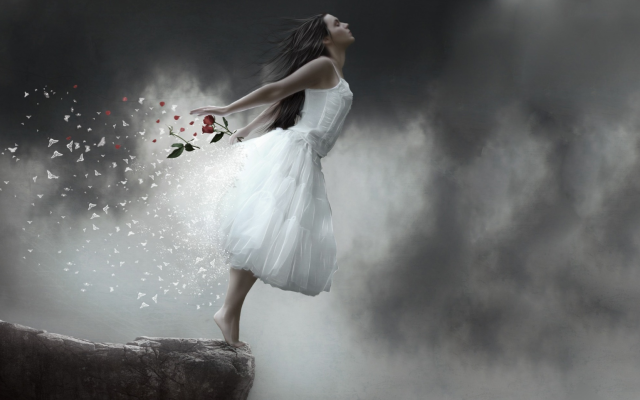 For many of us deciding to let go of someone is a very difficult process. This is particularly more challenging when it comes to people we care for. In life at some point or many, we will find ourselves in relationships which are toxic for us or in which there is an unhealthy balance. Despite us loving the other party, there will be times the person needs to be released. Once this is done there are two extra stages that one should pay attention for:

#1. TLTL:      This is the moment the other person realizes that this time you are serious about ending the relationship. Under the energy they have been operating they try to lazily give a little more of themselves, or will grant wonderful empty promises with nothing to sustain their intentions (ie. Marriage, Rehab, happiness, etc) but it is always too little, and too late. Many people, deep inside do not want the relationship to end will lie to themselves at this stage, think that things will actually get better and will get sucked back into the relationship. In a matter of speaking they will short sell themselves and throw to waste the effort and emotional courage that was needed to take that initial decision. This stage must be understood and recognized when ending a relationship.

#2. The Dead Dog:     This is a stage that occurs after some time has passed. It can range from a few weeks to a few years.  It can happen independently of  TLTL, but never before. Here, the person released suddenly appears in one’s life again, but not by coincidence. It could be a phone call, or email or facebook comment, etc., it is a sly attempt to enter one’s life again. It is the equivalent of seeing a dead dog in the street and poking it with a stick to see if there’s still some life left in it. This is how toxic people consider the relationship and because they have not dealt with their inner negativity on their own while away from you, energetically there is a hope in them that they may find a safe heaven within your life again to compensate. The Dead Dog stage is always initiated with “baits” which will inevitably be loaded with “hooks” that drag you back into the abusive or toxic relationship. Baits range from super wonderful referrals or opportunities to  an emotional/health crisis to even the ultimate bait which is the fake threat of suicide. By the way it is important to point out that both these modus operandi are usually subconscious.

So, Can toxic people change? Absolutely. If changed can one create a new relationship with them? Yes, as long as it is a “new” relationship, with completely new parameters and not a continuation of the older toxic version. If the ex toxic person has gone through considerable self effort to improve her/himself, this will be recognized in a very evident attitude of humility and almost embarrassment or regret. Their approach will be direct and blended with some sort of apology or gratitude for having the chance to be in front of you. They will also allow the relationship to grow at a very steady and slow pace. In sexual relationships, if the toxic person pushes for intimacy this is a clear sign of their energy not being whole and centered. Intimacy can occur, but it must be granted by the person that had to walk away due to the negativity she/he received.

There is much more that can be addressed with this subject, feel free to comment for specific situations.

This site uses Akismet to reduce spam. Learn how your comment data is processed.

Two Shamanic tips to cheer everyone up a bit. Shiny or glittery things by the front of your house will bring in success. Collect rainwater and use it to wash anything that you want to make grow, regenerate or rejuvenate. #shamantips #natureheals #connectyourbody #shinebright #magictips #successtips #keephealthy #sekhem #shaman www.HealerShaman.com

Thank you for stopping by!