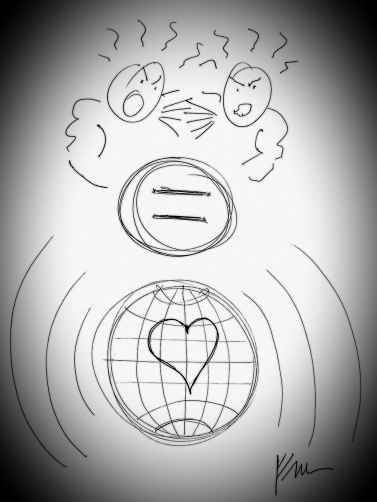 Humans naturally want to be happy. It is normal to avoid situations that are uncomfortable or painful, specially when it involves conflict with loved ones. As an Urban Shaman, I am a perpetual student of the Human Condition, so to me moments that happen naturally and that create discomfort as seen as opportunities for growth.

I just recently had one of those interactions with someone I respect very much. We were having an ideological conversation and as I touched on a negative stereotype I observed a reaction on my counterpart. She intelligently swayed away from the subject and kept a firm hold on her emotions, but too late, I had noticed and so I pushed the subject further. I even emphasized the negative bias. This was a conversation about race and their perceived intellectual limitations. I may have mentioned before here that we shamans do encourage judging books by their covers. We do this because we believe Mother Nature talks to us and never lies. If something looks a certain way, it probably is and we have developed a system to read certain characteristics in people’s body types and faces.

To make a short story even shorter, the conversation ended awkwardly and some emotions were rattled. Later, we spoke again, and this was the teaching:

Take a deep breath, center yourself and appreciate your humanity. We are all one species within Mother Earth. Let’s not avoid uncomfortable dialogue, let’s explore it together and in the process increase our respect, resolution and common evolution of each other.

To contact Shaman Flavio, please fill the form below:

One thought on “Using Disagreement to Grow Stronger”

This site uses Akismet to reduce spam. Learn how your comment data is processed.

Thank you for stopping by!